Citation for Scientific Publications: If you use the deprivation index in a scientific publication, please cite our manuscript detailing its creation and application to health outcomes:

2018 Update: The 2018_dep_index folder contains an version of the same deprivation index, but updated with data from the 2018 5-yr American Community Survey data. See the 2018 README for details on getting and using the data at the census tract and ZIP code level.

Socioeconomic variables from the American Community Survey (ACS) are frequently used in place of or in addition to individual confounders in observational studies. There are several census tract level measures that can be used to capture “community deprivation” and they are often highly correlated, e.g., median household income and educational attainment. Choosing only one ACS measure might not capture the entirety of community deprivation, but using more than one ACS measure can lead to problems in statistical models due to colinearity.

Here, we create a deprivation index for each census tract in the United States based on a principal components analysis of six different 2015 ACS measures. The first component explains over 60% of the total variance present in the five different ACS measures and is dubbed the “Deprivation Index”. Rescaling and normalizing forces the index to range from 0 to 1, with a higher index being more deprived.

The high resolution of the tract level is masked when using a nationwide scale. Click one of the maps or visit http://dep-index.s3-website.us-east-2.amazonaws.com/ to view an interactive, nationwide map online. Below is an example of how the index looks across the Greater Cincinnati, Ohio area: 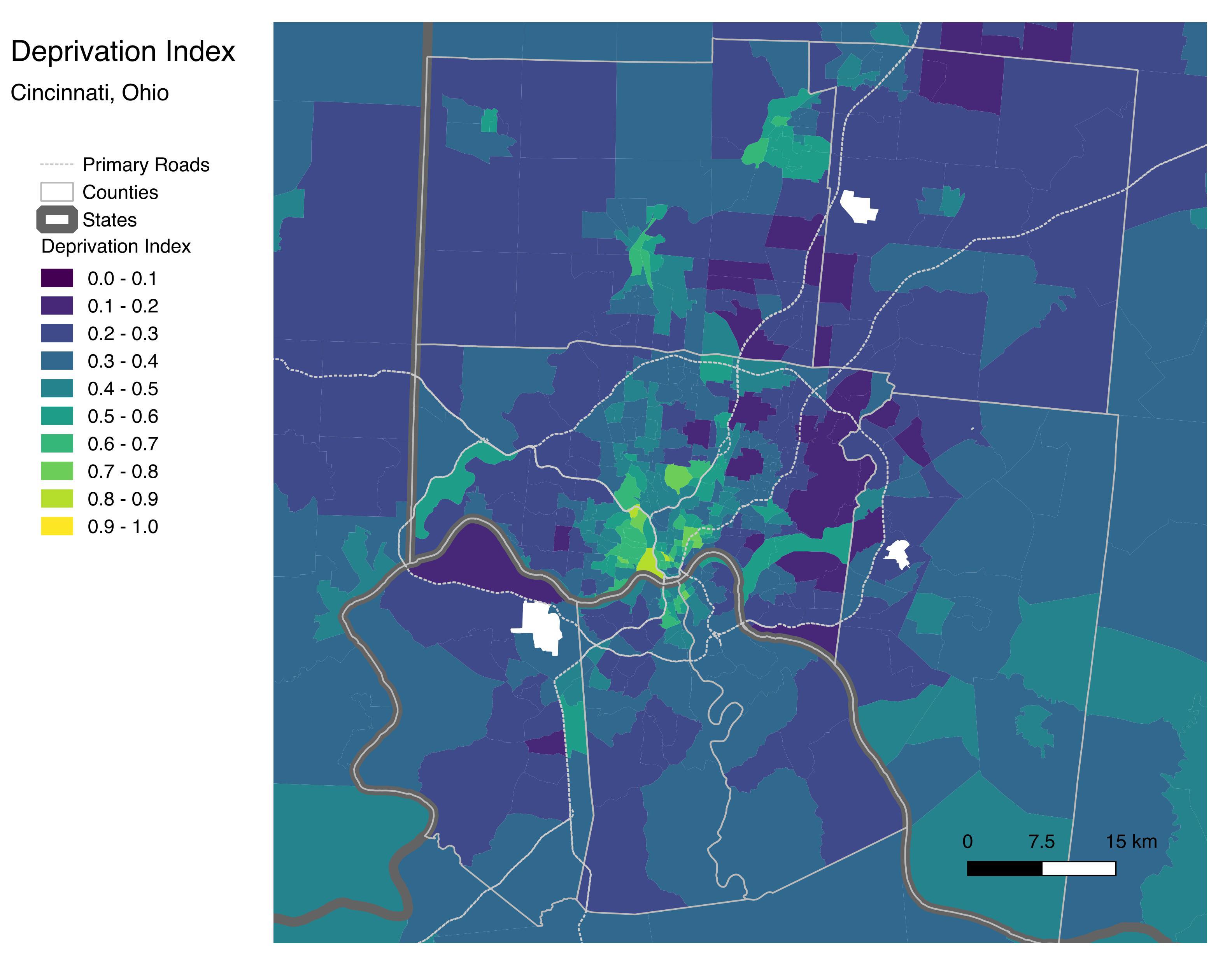 The data is contained in a CSV file called ACS_deprivation_index_by_census_tracts.csv which is a table of 73,056 census tracts listed by their FIPS ID and corresponding deprivation index. Also included for each tract are the six individual ACS measures used to create the deprivation index.

Use the following code to download the deprivation index data.frame directly into R:

Details on Creating the Index

Looking at a pairs plot of all the ACS estimates, we can see that they are mostly highly correlated with one another: 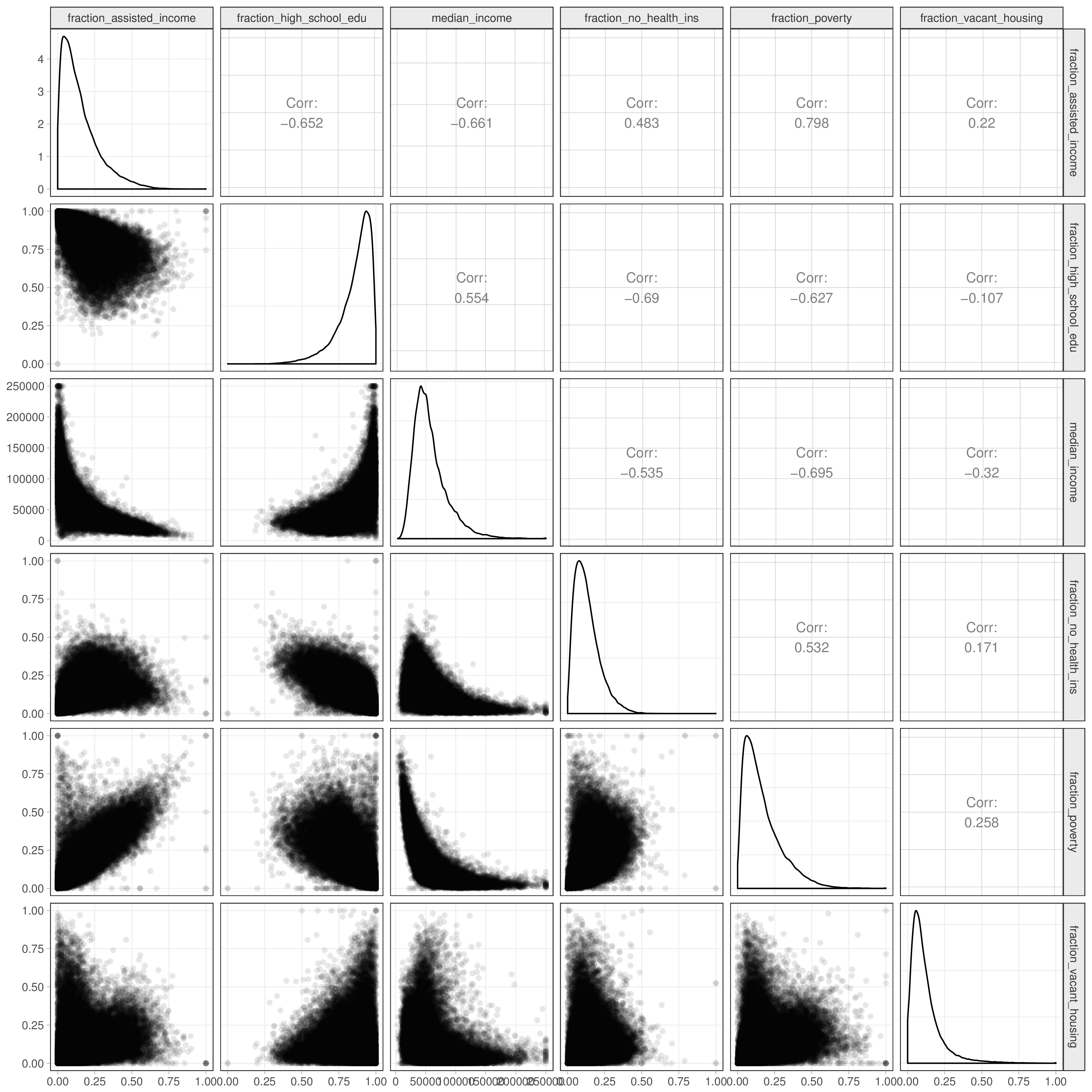 Carrying out a principal component analysis results in six components, with the first explaining over 70% of the total variance in the six ACS measures:

Looking at the loading weights used to calculate the principal components, we can see that (other than the fraction of vacant housing) the first component is somewhat equally weighted by each ACS measure, each in the expected direction such that a higher first component value is associated with higher deprivation.

The first component is dubbed the “Deprivation Index”; rescaling and normalizing forces the index to range from 0 to 1, with a higher index being more deprived. 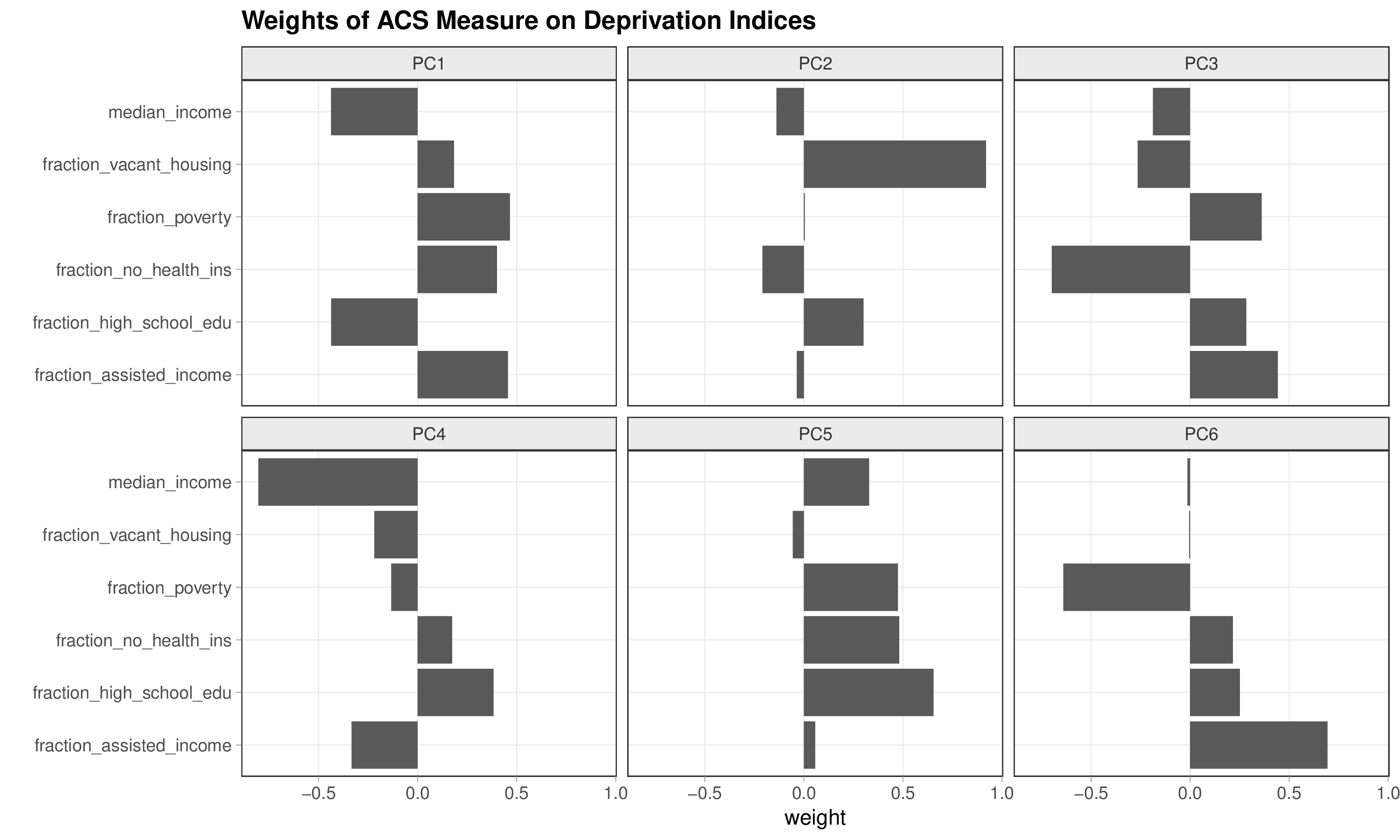 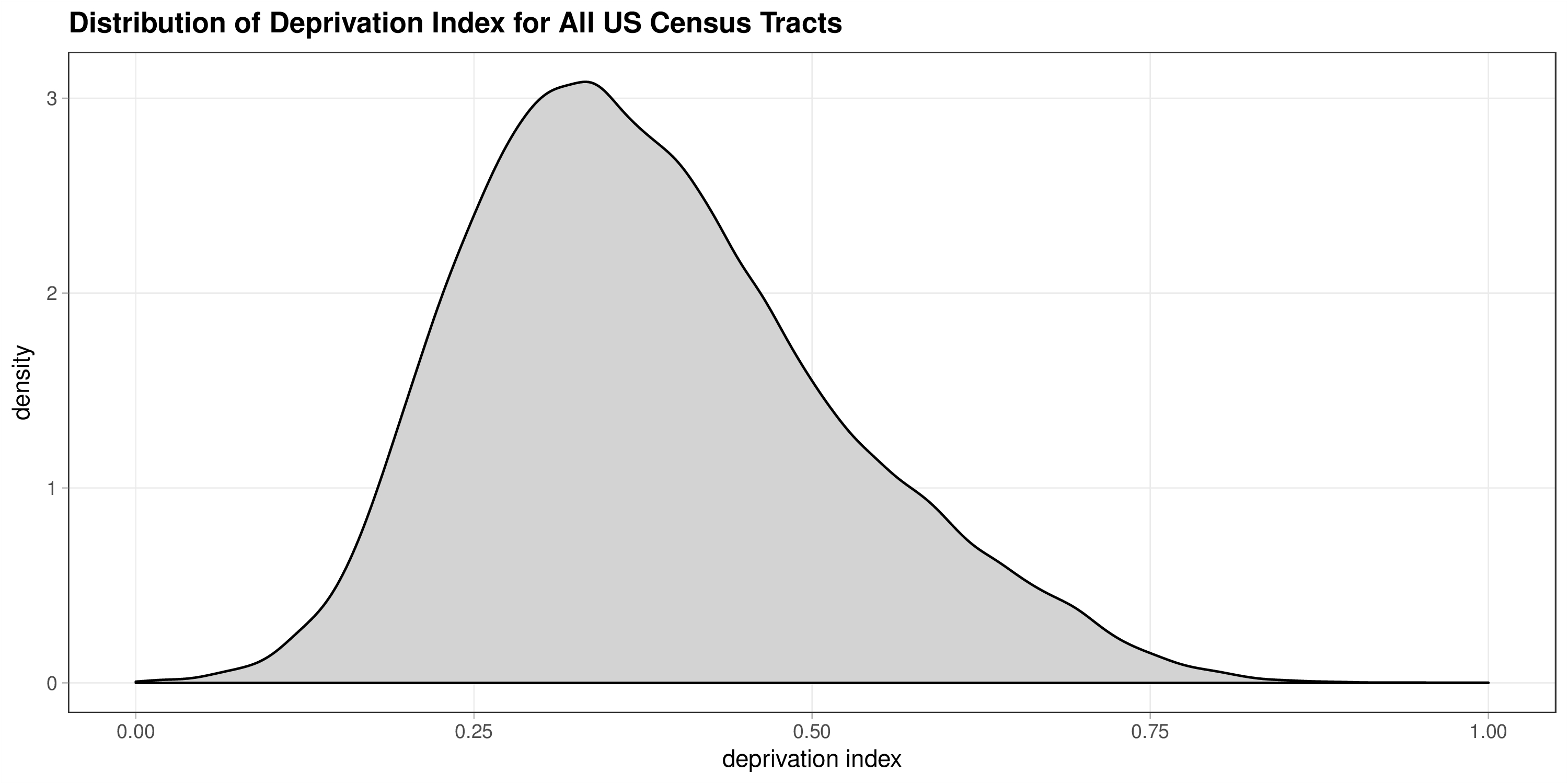 We can verify the relationship between the deprivation index and each of the ACS measures individually with scatter plots: 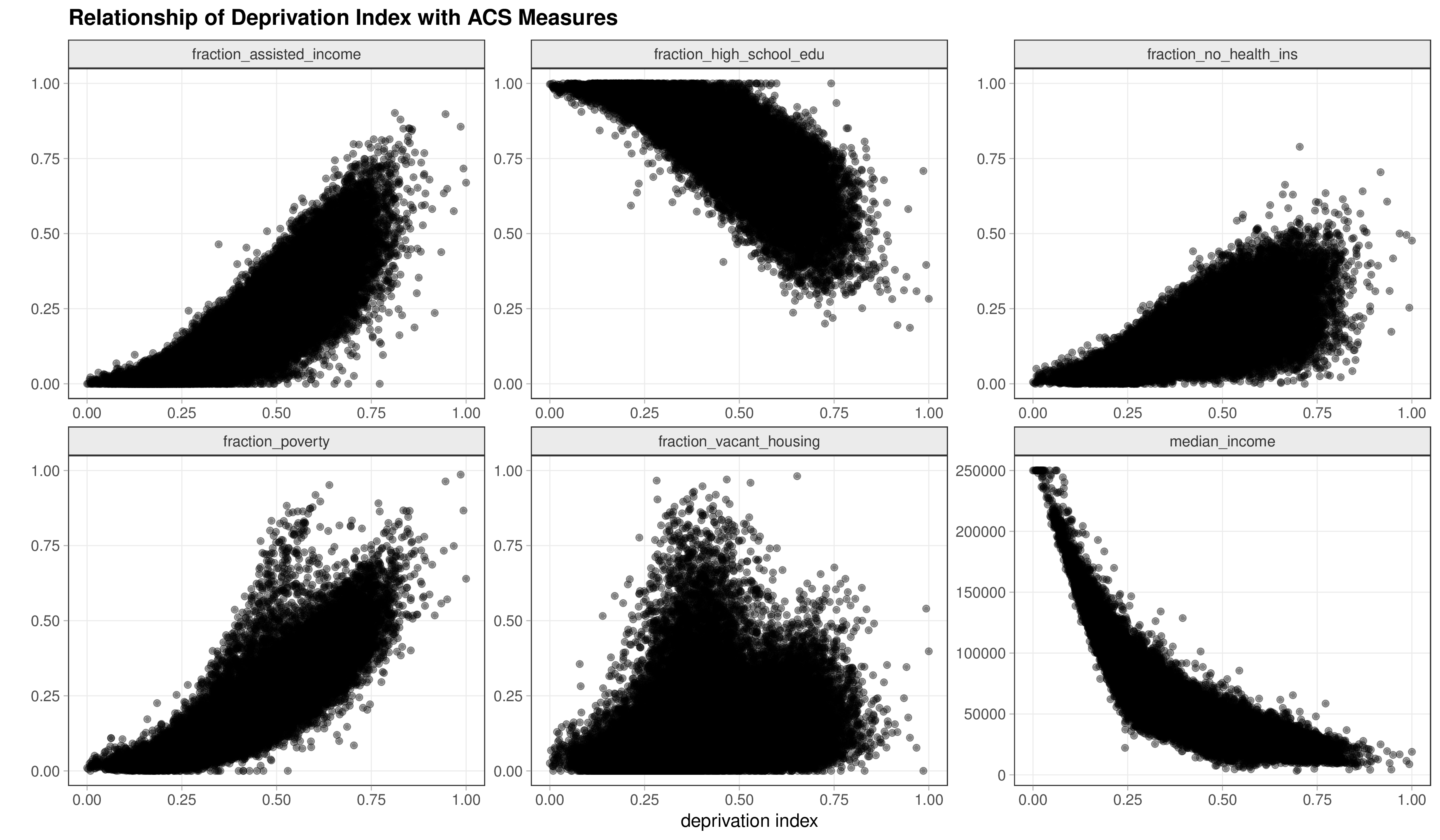